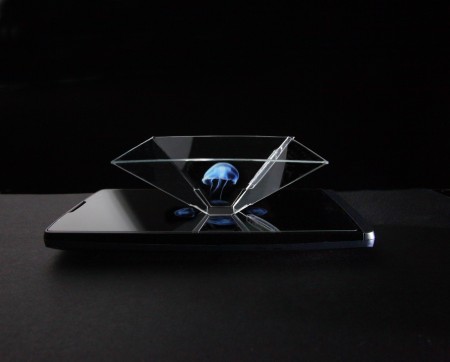 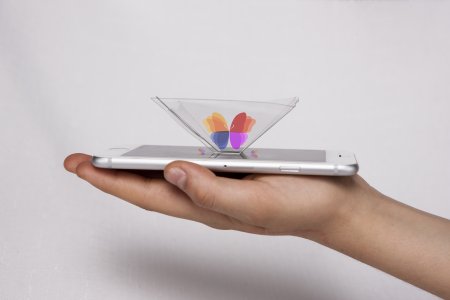 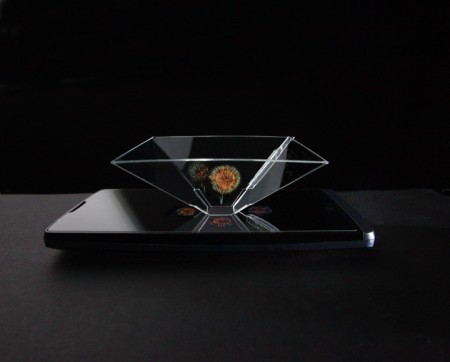 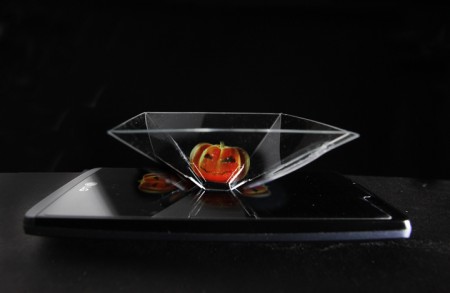 
Project Hologram-Like Images from Your Smartphone

This inverted pyramid made of thin, clear plastic creates a fantastic illusion that allows you to create what LOOKS LIKE a hologram using ANY smartphone and some videos from YouTube (search 4 face pyramid holographic video for plenty of cool video images to produce). You'll find dozens of 3 dimensional moving images to project such as lightning storms, the rotating Earth, flittering butterflies, swimming jellyfish, exploding fireworks, the flaming Sun and many, many more.

The PepperGram projector works because by darkening the room and using a bright 3D video, the 4 sided pyramid (made of semi-reflective, semi-transparent material) produces several such images so you can view a realistic image in 360 degrees.

The plastic used to make the PepperGram Projector is super thin - why? To prevent the formation of a double image.

So if it's not a hologram, what is it and how does it work?

A hologram is a specific kind of photograph that captures light that has been scattered from multiple surfaces of an object so the image produced appears three-dimensional. Creating a hologram requires a laser, a beam splitter and special holographic film. The “DIY Hologram” does not require any of that.

So, what is it? What’s going on is a variation of an old illusion technique used in theaters and haunted houses known as Pepper’s Ghost. It was made famous in 1862 by one John Henry Pepper. But the very first mention of the effect was made long before that, in the 16th century by a Neapolitan scientist, Giambattista della Porta who is also one of the pioneers in optics.

Pepper’s ghosts are created via a sheet of material that is both semi transparent and semi reflective in nature; usually either glass or plexiglass.  Generally, when you place an object on one side of the material, most of the light that bounces off that object passes (is transmitted) through.

However, if the object is very bright, and the space on the other side of the material is dark (think about standing in your kitchen with the shades open at night) the glass reflects a much larger portion of the light and you see an image much like you see in a mirror.  Because the image is a reflection, it appears to be coming from BEHIND the glass. Also because it is a reflection, it appears 3 dimensional; meaning that if you move your head or eyes, you see another angle and it looks very “real”, if dim.