Some Like It Hot!
Make Your Own Hot Sauce 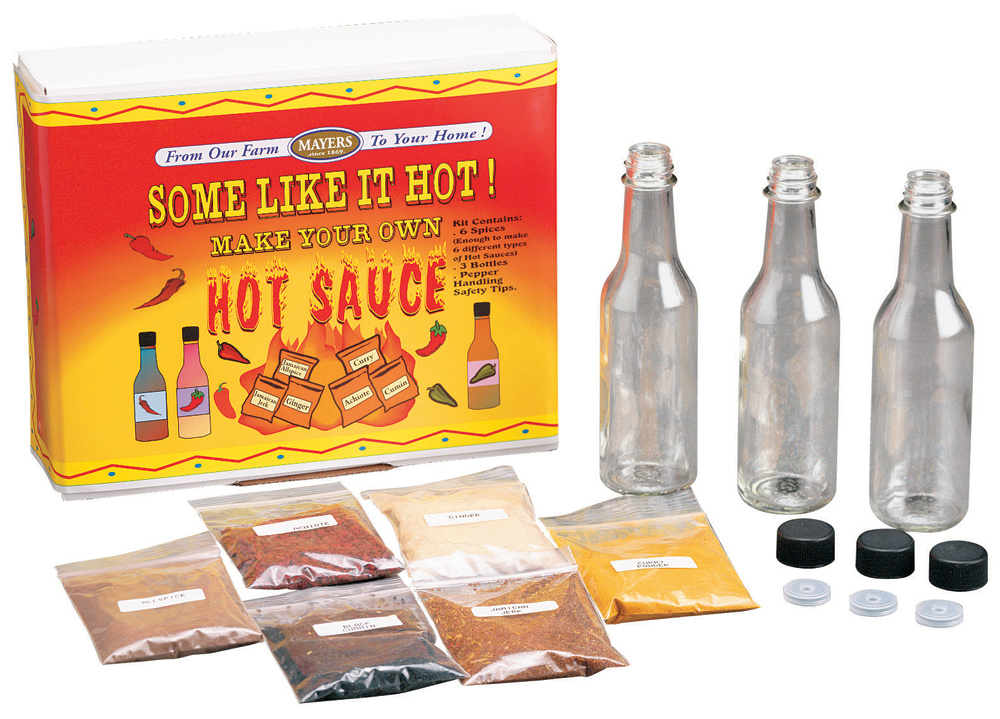 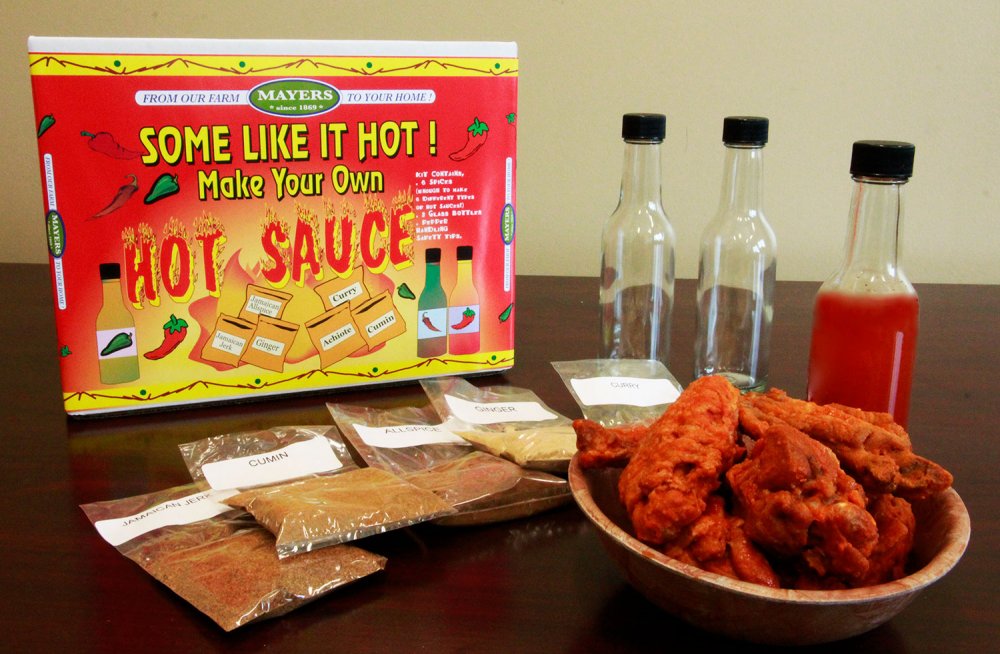 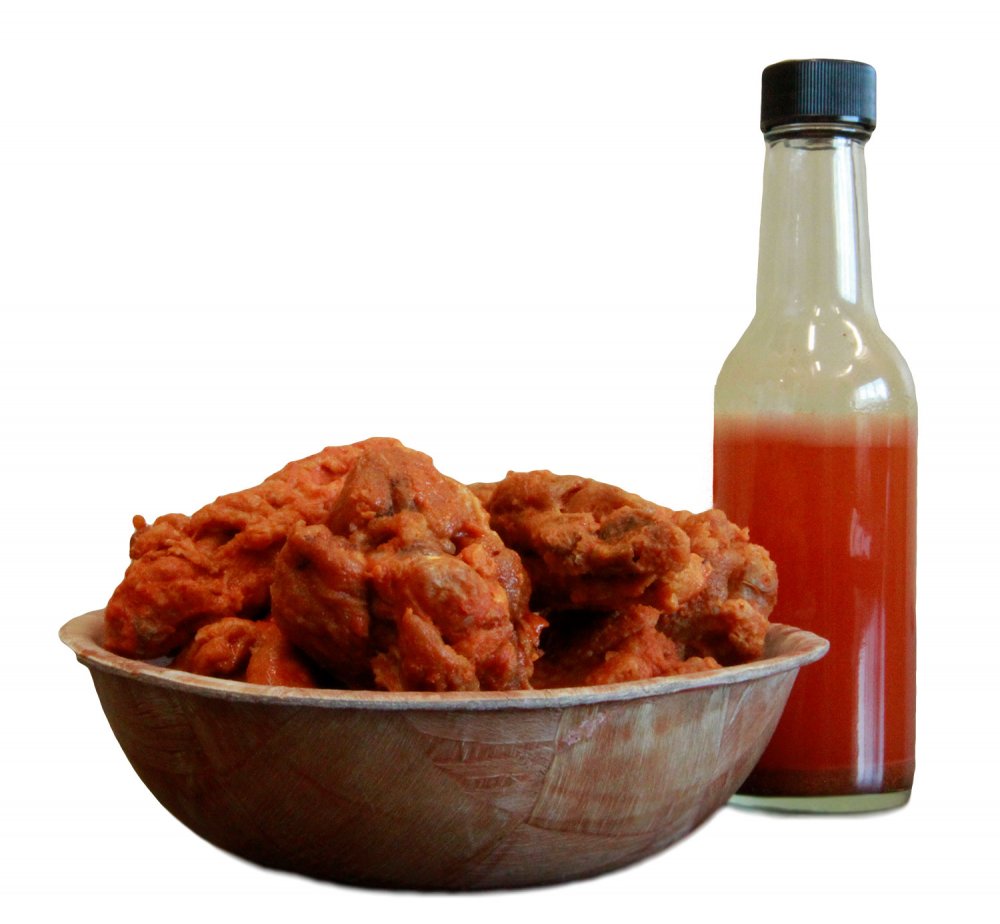 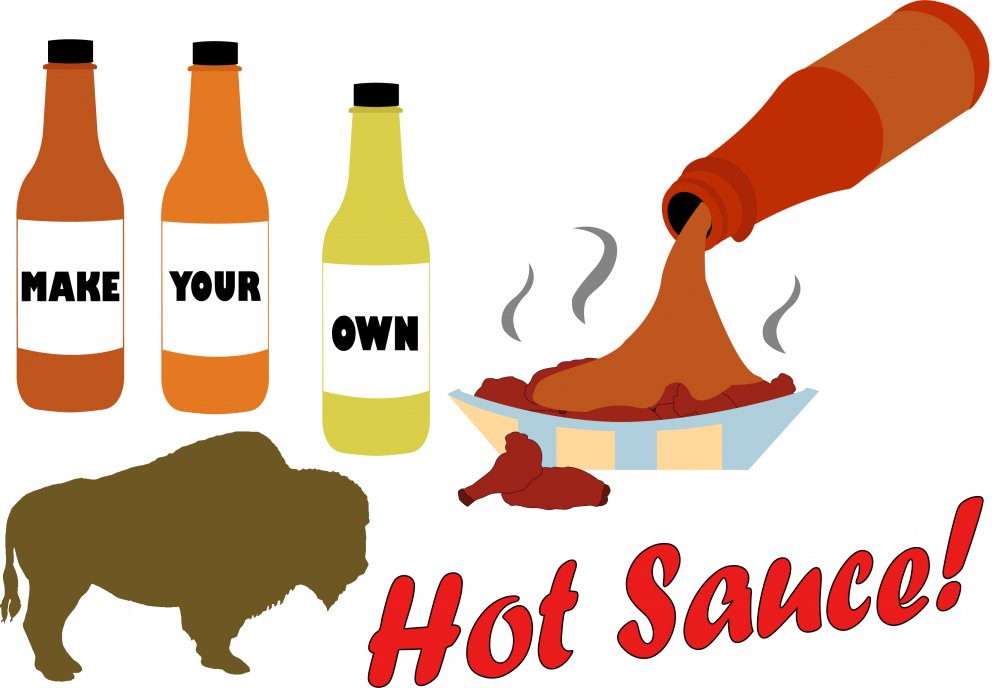 Made Near Buffalo, NY ... The HOME of the Chicken Wing!


Does the Store-Bought Stuff Lack the Nuanced Burn that You're Looking For?

Challenge your creativity (or imbalance) while pleasing (or cauterizing) your taste buds with hot sauce you make using the ingredients in this kit and your choice of pepper(s).

Start off safe with Cajun Garlic Lover’s Sauce or Easy Going Achiote or jump right into Tropical Storm or Flaming Fruit Sauce for a real lip melt-down. Or come up with your own mild or maniacal blend. Test the bounds of hot sauce technology with this red-hot kit!

Stop contemplating, and start making your own hot sauce today!

There really are as many variations of Hot Sauce as there are cooks who make the sauce. But Tabasco® brand hot sauce is one of the oldest in the world, and best known commercially produced products. TABASCO® brand products are produced by McIlhenny Company, founded in 1868 at Avery Island, Louisiana, and still in operation on that very site today.

The Company's roots were actually cultivated a few years earlier, shortly after the McIlhenny family returned to the Island from self-imposed exile during the Civil War. According to family tradition, founder Ed McIlhenny obtained some hot pepper seeds from a traveler who had recently arrived in Louisiana from Central America. McIlhenny planted them on Avery Island and then experimented with pepper sauces until he hit upon one he liked.

Since Tabasco® sauce is the longest continually produced hot pepper sauce, let's start with their procedure, which the McIlhenny Company has used for more than 125 years. After harvest, whole tabasco chilies are crushed in a hammer mill; salt is added in the amount of 8 pounds of salt for every 100 pounds of chilies. This mash is placed in Kentucky white oak barrels with salt-sealed wooden lids that have tiny holes which allow the gases of the peppers to escape during fermentation. The wooden tops are secured and placed on the barrels with stainless steel hoops (iron hoops disintegrate in the air of the salt and pepper mash).

Each 400-pound barrel is aged for three years, allowing the carbon dioxide to be released for the first two years. After this time, the salt topping hardens and naturally seals the barrel after the fermentation process ceases. The mellowing and aging process is called steeping, permitting the flavors and color to intermingle and mix naturally. The barrels are uncovered and oxidized mash is removed from the top of the barrels. The mash is inspected for aroma, color, and moisture. Upon being accepted under McIlhenny standards, the mash is pumped into large blending vats and mixed with distilled, all-natural white vinegar in the ratio of two-thirds vinegar to one-third mash. (Before being manufactured with commercial equipment, the blending process was referred to as "pounding," where the pepper mash was pushed manually through a strainer, where the vinegar was added, with a flat-headed "pounder". This was a very time-consuming process and took a lot of manual labor to do large quantities of sauce.)

Mayer’s is the oldest continuous cider mill in Webster, New York. In 1866 Donat Mayer purchased the 75-acre farm and farmhouse which had been built in 1830. Shortly after purchasing the property, Donat and his son Donat Jr. began grinding and pressing their excess apples into cider. It wasn’t long before other area apple growers began bringing their apples to Mayer’s to have them processed into cider too. They would then take the apple cider back home in barrels where most of it was then turned into” apple jack” and perhaps a bit of vinegar to be used for cooking and preserving home grown fruits and vegetables.

In the 1920’s, a third generation of the Mayer family led by Harvey, grandson of the first Donat, took over the family cider mill and began selling bottled cider to the general public. In those early years, a fire destroyed a portion of the cider mill but was quickly replaced with a concrete block building that still serves as the storefront today.

In 1962, Harvey Mayer sold his family business to Dave Bower. Harvey Mayer, who retained the family homestead next door to the mill, came over almost daily to assist Dave for many years. Mayer’s soon diversified and expanded well beyond just pressing apples for sweet cider. Grinding grapes and pressing them into juice for wine making soon became a routine addition to the business. Dave Bower’s sons Dave Jr. and William grew up helping at the cider mill, and both have chosen to join their father in the family business. As each son joined the firm, new aspects were added to the business: home wine making kits, wine presses, grinders, bottles, corks, and all the DIY ‘do it yourself’ materials necessary for making wine.

Recently a range of distinctive food and craft kits has been introduced, each one a creative adventure from the very beginning. Every kit is an exciting challenge that will stimulate your creativity while you produce gourmet treats and gifts for friends and family

Make Your Own Salsa Kit